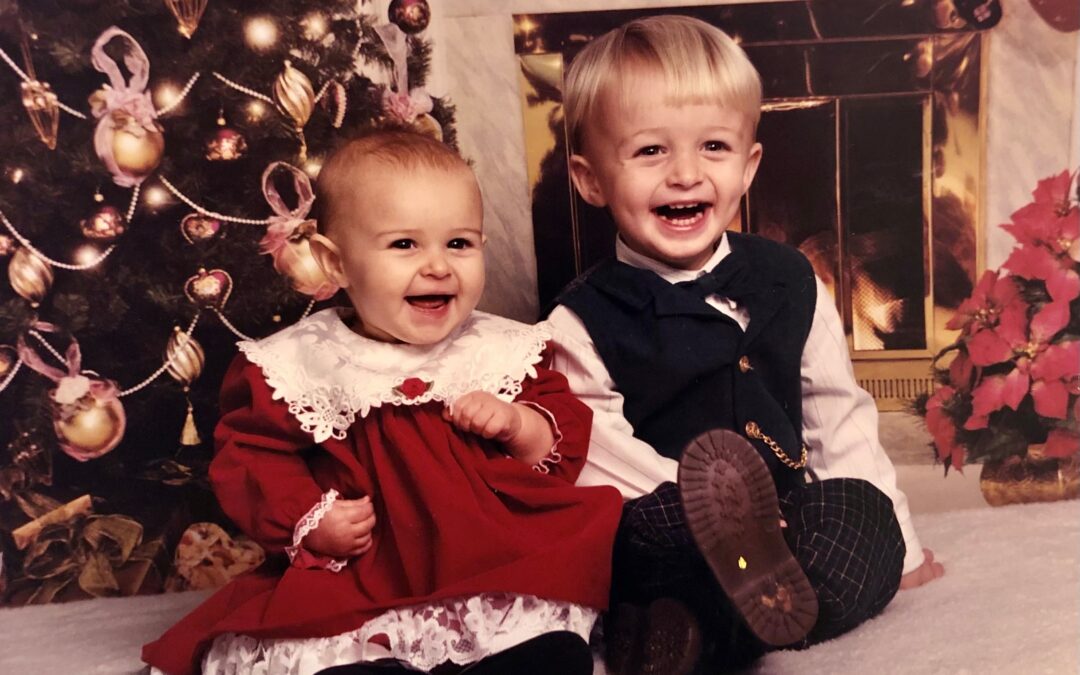 It happened when our kids were very young. The three of us, two-year-old Zach, nine-month-old Jane, and very old Daddy were on a quest to get “the Christmas picture.” Somehow Mommy had conveniently scheduled this for a time when she was working.

Patiently, I got the kids dressed in their Christmas best with a green bow tie and patent leather shoes. (Jane wore the shoes.) When we arrived at the mall, Zach led the charge to the second floor of JC Penney’s. Against all odds, both kids smiled while Elmo slid off the photographer’s head—the 18th time.

While I called Leanne about the loan we would need to buy the pictures, Zach discovered an aisle filled with squishy dolls. Soon a sizeable colony was growing in the middle of the photographer’s waiting area.

But the fun didn’t end there. Known to be a glutton for punishment, it dawned on me we could get my watch fixed at a store on the other side of the mall. “Why should having no stroller stop us from doing this?”

Bravely, I hitched up Jane “dead weight” Ross in one arm, carried the diaper bag in the other, and set off on the horizon with Zach somewhere between 3 and 30 feet behind at all times.

It cost $1.07 to fix the watch. The only thing left was to head back to the car. As we waved to Santa, I took a wrong turn, and we ended up in women’s accessories at Bergner’s.

It was on our third cross-country trip through the mall that it happened.

Zach’s little legs were going as fast as they could to keep up with Daddy and Jane. By this time, sweat was dripping down my forehead, and all I could think about was car seats with restraining straps.

Maybe that’s why I couldn’t understand what Zach was saying. “Nanny-and! Nanny-and!!” Finally, it sunk in. After being dragged halfway around the world, all Zach wanted was “Daddy’s hand.”

Christmas is a wonderful, rushed, magical, and exhausting season. At times, we may find ourselves worn out from criss-crossing the globe or sweating the details of a big celebration.

When that happens, it’s a good idea to look up and ask for Daddy’s hand. Jesus was born so we could know that reassuring love.

A native of Cambridge, Illinois, Roger has served as a pastor in Texas, the British Channel Island of Guernsey, and Illinois. While in Illinois, he led teams that planted two new churches and served for 10 years as senior pastor of First United Methodist Church of Springfield. It was his privilege to serve as the Director of Congregational Excellence in the Missouri Conference before coming into his current role as an executive coach and specialist with Spiritual Leadership, Inc. (SLI). His passions include SCUBA diving in warm blue water, playing board games with family and friends, and teaching evangelism and church planting as an adjunct professor at SMU’s Perkins School of Theology. He also has a weakness for golf. Roger is the author of three books, “Meet The Goodpeople: Wesley’s 7 Ways to Share Faith,” “Come Back: Returning to the Life You Were Made For,” and “Come Back Participant Guide,” all through Abingdon Press. Roger is married to Leanne Klein Ross, and they have two adult children, Zach and Jane (who’s married to Sam).